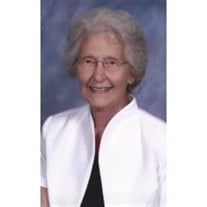 Wilma N. Wessel was born on February 10, 1925 in Jackson County Indiana, the daughter of Willard and Adella (Rust) Newkirk. She was baptized on February 22, 1925 at her home, by the Reverend Piel. Following instructions in the Christian Faith, Wilma was confirmed on April 9, 1939 at St. Paul's Borchers by the Reverend Heideman. Her confirmation verse was Matthew 24:13, "But he who stands firm to the end will be saved." On June 17, 1951, Wilma was united in marriage with Victor G. Wessel at St. Paul's, Borchers by the Reverend Sixt. Wilma and Victor were blessed with three daughters. On July 23, 2013 after a short illness, Wilma entered hospice care. Throughout her final days, Wilma was surrounded by her family. The Lord peacefully brought her to the joys of heaven from her home in Brownstown, Indiana on July 24, 2013. She had attained the age of 88 years. Wilma was a loving wife, a devoted mom, grandma, and great-grandma. After her faith and family her joys were gardening, traveling, watching the birds in her back yard, and doing crossword and number puzzles. She shared her faith with her family and friends by her example. Wilma was preceded in death by her husband, Vic, by her parents Willard and Adella Newkirk, and brother Walter F. Newkirk. She is survived by her daughters and their husbands Peggy and Larry Peters of Vallonia, Kathy and Peter Meier of Mayer, Minnesota, and Carol Sue and Pat Esser of Mayer, Minnesota. She is also survived by her grandchildren and their families, Jodi (Peters) and Tim Seevers, Maggie and Wesley; Bradley and Elizabeth Peters, expecting a baby daughter; Abby (Peters) and Corey Stocksdale, Olivia and Simeon; David and Susan Meier, Clara and Evelyn; Jennifer (Meier) and Matthew Smith; Daniel and Jessica Meier; Mark Esser and Kate Esser. She is also survived by her sister Beatrice Von Dielingen, her brother and sister-in-law Paul and Ruth Ann Newkirk, and sister and brother-in-law Carol and Nicholas Weil; also by sister-in-law Lola Mae Wessel, brother-in-law Richard Wessel, sister-in-law Loretta Wessel, sister-in-law and husband Agnes (Wessel) and William Dailey, brother-in-law and wife James and Virginia Wessel, sister-in-law and husband Janet (Wessel) and Floyd Behrens, brother-in-law and wife Allan and Delores Wessel, by nieces, nephews, other relatives and friends. Funeral services will be conducted at 11:00 a.m. Saturday, July 27, at Trinity Lutheran Church, Vallonia, with the Rev. Eric Ahlemeyer officiating. Burial will be in the Trinity Lutheran Cemetery. Friends may call at the Johnson Funeral Home, Vallonia, from 4 until 8 p.m. Friday, July 26. Visitation Saturday will be at the church from 10:00 a.m. until the time of service. Memorials may be made to Trinity Lutheran Church, Lutheran Central School, Trinity Lutheran High School, or the donor's choice. Service: Saturday at 11am Trinity Lutheran Church Visitation: Friday from 4-8pm Johnson Funeral Home

Wilma N. Wessel was born on February 10, 1925 in Jackson County Indiana, the daughter of Willard and Adella (Rust) Newkirk. She was baptized on February 22, 1925 at her home, by the Reverend Piel. Following instructions in the Christian Faith,... View Obituary & Service Information

The family of Wilma N. Wessel created this Life Tributes page to make it easy to share your memories.

Send flowers to the Wessel family.