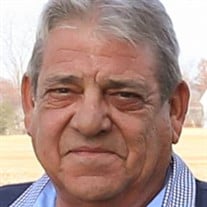 Wayne L. Burcham, 63, of Vallonia, died at 8:16 p.m. on June 13, 2019 at Schneck Medical Center, Seymour. He had been ill for about a year. Wayne was a member of the Driftwood Christian Church and a life-long self-employed farmer and self-taught mechanic. He was a 1973 graduate of Brownstown Central High School where he was very active in the FFA. Wayne also attended Purdue University. He was born on October 14, 1955 in Seymour, IN to the late Howard L. Burcham and Ida Doris Hess Burcham. He married Mary Lou Koop Burcham on May 30, 1981 in Brownstown and she survives in Vallonia. Other survivors include his 3 sons, John (Kara) Burcham, Jeremy (Haley) Burcham & Chad Burcham (Ellen Jarvis) all of Vallonia; 3 grandchildren Colton, Jesse & Jenna Burcham; sisters, Nancy Burcham-O’Brien of Indianapolis & Jane (Bob) Allen of Arizona; several nieces and nephews also survive. Wayne was preceded in death by his parents and an infant brother, Johnny Burcham. Funeral services will be conducted Tuesday, June 18, 2019 at 11:00 a.m. at the Driftwood Christian Church, Vallonia with Steve Gommel & Daniel Ison officiating. Friends may visit with the family on Monday, June 17th from 4:00-8:00 p.m. at the Driftwood Christian Church and on Tuesday from 10:00 a.m. until the time of service. Burial will take place at the Vallonia Cemetery. Memorial contributions may be given to the Driftwood Christian Church or to the Driftwood Township Volunteer Fire Department. Wayne was a very generous man. He had so much love not only for his family, but for his friends, his community, and for the people who surrounded him. He openly and anonymously gave to so many people, whether it be buying someone lunch, bringing them a milkshake or just handing them money or taking them food because he knew there was a need. A quote that Wayne always shared with his boys----“We, the few who have done so much, with so little, for so long, can now do anything with practically nothing.” Johnson Funeral Home is handling the arrangements. Online condolences may be expressed at www.johnsonfh.net

Wayne L. Burcham, 63, of Vallonia, died at 8:16 p.m. on June 13, 2019 at Schneck Medical Center, Seymour. He had been ill for about a year. Wayne was a member of the Driftwood Christian Church and a life-long self-employed farmer and self-taught... View Obituary & Service Information

The family of Wayne L Burcham created this Life Tributes page to make it easy to share your memories.

Send flowers to the Burcham family.