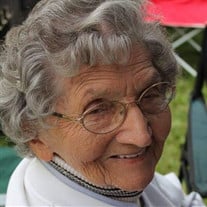 Virginia Brewer, 95, of Brownstown, died at 11:31 a.m. Monday, March 4, 2019 at her home. She had been ill for 2 weeks. She was a member of St. Peter’s Lutheran Church. She was a graduate of Watervliet High School where she was a Drum Majorette. Virginia was the secretary at Brewers Sales and Service and a waitress at the Dairy Queen. She loved watching I.U., enjoyed being with her family, especially her grandchildren and loved being surrounded by her four legged friends. Virginia was born on September 30, 1923 in Watervliet, MI to the late Robert & Pauline (Roekle) Wendzel. On November 27, 1947 in Coloma, MI she married Boyd Cauble Brewer and he preceded her in death. Survivors include one son, Boyd Carson (Tamara) Brewer of Brownstown; grandchildren, Josh (Selena) Brewer, Leah (Ryan) Scott, Bethany (JL) McElfresh, Kevin Reynolds, Kaula Meadors, Brie Butler, Bristin Butler, Taylor McElfresh, Jozee Meadors, Traelyn Hope & Kennedi Butler; brother’s, Elton (Millie) Wendzel & Kenny (Leola) Wendzel both of Michigan and a sister, Eleanor (Walt) Klug of Michigan. Virginia was preceded in death by her parents, husband, sister, Lolly Winkel and brothers, Norman & Walter Wendzel. Funeral Services will be conducted at 11:00 a.m. Thursday, March 7, 2019 at Johnson Funeral Home, Vallonia with Pastor Jeremy Yeadon officiating. Friends may the visit the funeral home on Wednesday, March 6th from 4:00-8:00 p.m. and on Thursday from 10:00 a.m. until service time. Burial will take place at Fairview Cemetery, Brownstown. Memorial contributions may be given to Red Sky Rescue and Schneck Medical Hospice. Online condolences may be expressed at www.johnsonfh.net

The family of Virginia Brewer created this Life Tributes page to make it easy to share your memories.

Send flowers to the Brewer family.