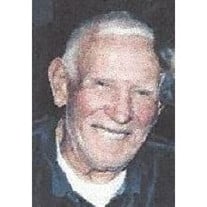 Sherman Nolan, 92, of Brownstown died on Wednesday, May 28, 2014 at Hoosier Christian Village in Brownstown, he had been ill for one week. He was a US Army WWII veteran. He attended Faith Baptist Church. Had worked at a Coal Mine, Tin Mine, he was a cowboy, and worked at the Foundry, Shirt Factory, and lastly as a Night Watchman at Smiths Cabinet Factory. Sherman was a member of the Masonic Lodge 146 in Seymour. Sherman was born on January 31, 1922 in Pinehill (Hardin County), Kentucky the son of the late William "Willie" Nolan and Nora (Nolan) Nolan. On July 31, 1948 in Salem, Indiana he married Bessie Underwood, she preceded him in death on March 14, 2011. Survivors include his sons: Chester (Sherry) Nolan of Brownstown and Robert (Sharon) Nolan of Medora; a daughter, Irene (Wayne) Howell of Tennessee; Grandchildren: Theresa (Jim) Milton, Sandy (Ronnie) Cowart, Misty (Keith) Stuckwisch, Kristy (Tim) Cortney, Maria (Bryan) Powell, Bobbie Sue (Chris) Snodgrass; step Grandchildren, Kaylene (Brett) Turner and Duane Howell; Great Grandchildren, Mitchell Reed, Michael Powell, Brooklyn Snodgrass, Jessica Stuckwisch, Macey Stuckwisch, Tiffany Cowart, Chris Cowart, Kelly Cowart, Jessica Milton, Sarah Howell, Lucas Howell, and Daisha Turner; Great Great Grandchildren, Ariena Rogers, Connor Peyton-Lee Cowart, Karli Cowart and Emma Burgar; and one sister: Mary Jane Gray of Seymour. He was preceded in death by his parents; wife; a grandson, Chad Nolan, a great granddaughter, Danielle Reed; Brothers: Garfield Nolan, Elvin Nolan, Joseph Nolan, Orville Nolan, and Tony Nolan; and one sister: Nora Creech. Visitation will be on Thursday, May 29, 2014 from 4-8pm at Johnson Funeral Home and also one hour prior to services on Friday. Masonic service will be conducted by Masonic Lodge #146 at 7:30pm on Thursday at the funeral home. Funeral Services will be conducted at Johnson Funeral Home on Friday, May 30, 2014 at 11am with Ronnie Cowart officiating. Burial will follow at Winslow Cemetery with Military Graveside rites conducted. Memorial contributions may be given to Hoosier Christian Village. Online condolescenes may be made at www.johnsonfh.net. Service: Friday, May 30, 2014 at 11am Johnson Funeral Home Visitation: Thursday, May 29, 2014 from 4-8pm Johnson Funeral Home

Sherman Nolan, 92, of Brownstown died on Wednesday, May 28, 2014 at Hoosier Christian Village in Brownstown, he had been ill for one week. He was a US Army WWII veteran. He attended Faith Baptist Church. Had worked at a Coal Mine, Tin Mine,... View Obituary & Service Information

The family of Sherman Nolan created this Life Tributes page to make it easy to share your memories.

Send flowers to the Nolan family.