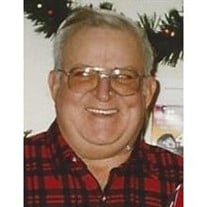 Robert Hehman, 87, of Brownstown, died at 6:50 p.m. Monday, July 25, 2016 at the Hoosier Christian Village. He has been ill for 1 ½ years. He was an Army Veteran and a member of St. Peter’s Lutheran Church. He worked at the telephone company, was a Janitor at the Brownstown Central High School, truck driver, worked at the Water Company and was the CEO of Hehman Bottle Gas. One of Bob’s greatest joys in life was watching and being involved in any kind of racing. He was born August 15, 1928 in Jackson Co., IN to the late George Fredrick Hehman and Elizabeth White Hehman. He lived all of his life in Jackson County. He married Juanita Joan Royse Hehman in Brownstown on February 14, 1953 and she preceded him in death on November 21, 2012. Survivors include 2 sons, Roger (Peggy) Hehman and Jeffrey A (Sandy) Hehman both of Brownstown; Grandchildren, Ryan & Lindsay Hehman, Melanie Hehman, Jason & Carla Hehman, Jasmine Hehman and Jamison Hehman. Numerous great grandchildren and several nieces and nephews also survive. He is preceded in death by his parents, one infant son, Jack Fredrick Hehman, his wife, 3 brothers, Charles, Herbert “Whitey”, and Irvin “Shorty” Hehman, and a sister, Norma Jean Lawson. Funeral Services will be conducted at 1 p.m. Friday, July 29th at Johnson Funeral Home with Pastor Jeff Patterson officiating. Friends may call Thursday from 4-8 p.m. and Friday from noon until service time at the funeral home. Burial will take place at the St. Peter’s Lutheran Cemetery. Full military gravesite rites will be conducted. Memorial contributions can be given to the Brownstown Speedway Handicap Section Improvement. Online condolences may be expressed at www.Johnsonfh.net

The family of Robert D Hehman created this Life Tributes page to make it easy to share your memories.

Send flowers to the Hehman family.