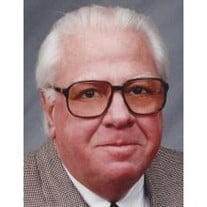 Johnson Funeral Home 2005 South Main Street Vallonia, Indiana 47281 812-358-3341 Robert “Bob” Eugene Thomas, 84, of Brownstown, passed away unexpectedly at 10:22 a.m. Thursday, November 24, 2016 at his home. He was a veteran of the US Navy and a member of the Brownstown Presbyterian Church. He owned and operated Bob Thomas Chevrolet in Brownstown for 37 years. He was a member of the VFW of Seymour, a 55 year member of the Masonic Lodge of North Vernon and a member of the Shriner’s in Indianapolis. He was a past member of the board of directors of The People’s Bank and a past President of the Welfare Board of Jackson County. He graduated from North Vernon High School and attended University of Louisville for 2 years. He enjoyed auto racing and was a member of Al Unser, Jr’s winning 500 team. Mr. Thomas was born January 26, 1932 in North Vernon, IN to the late William Russell Thomas and Pearl Nocks Thomas. He married Ethel Holland Pierce on August 12, 1956 in North Vernon, IN and she preceded him in death on December 16, 1988. Together, they moved to Jackson County in 1968. Survivors include children, Margo Burnside of Freetown, Clifton Thomas of Vallonia, and Anne (Weldon) Carlin of Brownstown; grandchildren, Courtney Burnside, Jason & Ryan Burnside, Kara Thompson, Megan & Caitlin Thomas, Brooke, Hunter, & Chloe Carlin. He was preceded in death by his parents, wife, and a sister, Winnie Buell. Funeral services will be conducted Wednesday, November 30th at 1:00 p.m. at the Brownstown Presbyterian Church. Friends may call Tuesday, November 29th at JOHNSON FUNERAL HOME from 5-9 p.m. and at the CHURCH Wednesday from noon until service time. Burial will take place at the Vernon Cemetery. Full Military Graveside rites will be conducted. Memorial contributions may be given to the Donor’s Choice. Online condolences may be expressed at www.Johnsonfh.net

The family of Robert "Bob" Eugene Thomas created this Life Tributes page to make it easy to share your memories.

Send flowers to the Thomas family.