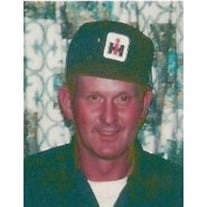 Robert A. “Bob” Collins, 81, of Brownstown, died at 5:00 a.m. Monday, August 07, 2017 at the Scott County Hospital. He had been seriously ill for 3 weeks. He was of the Methodist faith. He was welder and sand and gravel operator and retired from Lee’s. Although he worked as a welder he enjoyed doing it in his spare time and made lots of deer stands for hunters. He was born on October 9, 1935 to the late James H. & Pauline McKelvy Collins. He married Lilly Myrtle Collins on May 23, 1955 in Hanover, IN and she preceded him in death on December 17, 2006. He has lived in Jackson County since 1971. Survivors include his children, Myra (Jerry) Hartley of Hayden and Craig (Tina) Collins of Seymour; 11 Grandchildren, 6 great grandchildren & 5 great great grandchildren; 1 sister, Louise Hovatter of Waverly, TN He was preceded in death by his parents, wife, and a daughter Roberta Fiscus; 4 brothers, Fred, Clyde, Joe, & Mack Collins; 4 sisters, Jean King, Betty Lou Collins, Mae Raymond, & Blanche Smith. Funeral services will be conducted at 2 p.m. Wednesday, August 9, 2017 at Johnson Funeral Home. Friends can visit at the Funeral Home Wednesday from 10 a.m. until service time. Burial will take place at the Vallonia Cemetery. Memorial contributions may be given to Amedisys Hospice or to the Donor’s Choice. Online condolences may be expressed at www.Johnsonfh.net

The family of Robert "Bob" A Collins created this Life Tributes page to make it easy to share your memories.

Send flowers to the Collins family.