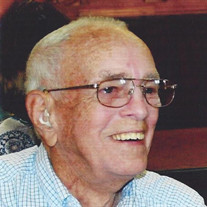 Perry William “Bill” Foster, 95, of Vallonia, died at 7:55 a.m. Sunday, December 10, 2017 at his home. He had been ill for one week. He was a graduate of Vallonia High School. He was a veteran of the United States Navy serving in WWII from February 2, 1942-November 6, 1945 and the Korean Conflict from December 3, 1951-November 25, 1952. He was trained as a RADAR Specialist. He retired as the Vallonia Post Master on August 12, 1980. He was a member of Vallonia Christian Church. He was also a former member of the Lions Club, Vallonia Volunteer Fire Department and the Brownstown American Legion. Bill enjoyed fishing, mushroom hunting and listening to country music. He was born on November 15, 1922 in Clearspring, IN to the late Lester Travis Foster and Agnes Ann Sovern Foster. On April 22, 1950 in Freetown, IN he married Oma Ethel Soladine Foster and she preceded in death on May 20, 2009. Survivors include, 2 sons, William “Bill” (Jackie) Foster of Bedford, Robert “Bob” Foster of Vallonia, and 2 daughters, Jane (Eugene) Litten of Hayden, and Sheila “Chic” (Tim) Powers of West Port; grandchildren, Chris & Travis Foster, Jackie Waskom, and Jon Sullivan; Step grandchildren, Bobbie Phares, Christy Powers, and Timothy A. Powers; 9 great grandchildren and 4 step great grandchildren; one brother, George Foster of Chesapeake, VA and 2 sisters, Virginia Boling of Medora and Irene Cole of Seymour. He was preceded in death by his parents, wife, one brother, Harold Eugene Foster, one sister, Mary Kozik, a step granddaughter, Sandra Powers and a step great grandson, Brandon Ty. Funeral Services will be conducted Wednesday, December 13th at 1:00 p.m. at the Johnson Funeral Home, Vallonia with Rev. Johnny Johnson officiating. Friends may visit at the funeral home on Tuesday, December 12th from 4-8 p.m. and Wednesday from noon until time of service. Burial will take place at the Vallonia Cemetery. Full Military Graveside Rites will be conducted. Memorial contributions may be given to the Hoosier Christian Village. Online condolences may be expressed at www.Johnsonfh.net

The family of Perry William "Bill" Foster created this Life Tributes page to make it easy to share your memories.

Send flowers to the Foster family.