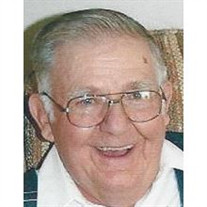 Norman William Teulker, 87, of Brownstown, died at 5:10 p.m. August 14, 2017 at the Hoosier Christian Village after being ill for 4 ½ years. He was a veteran of the U.S. Naval Airforce and served during the Korean War. He was a member of St. Peter’s Lutheran Church in Brownstown for over 50 years. He was a self-employed farmer of cows and fields, a bus driver of the children, and a factory worker at Kieffer Paper Mill for 27 years. Norman was a lover of nature—hunting & fishing, a lover of animals—dogs, rabbits, & horses, and he could tell many stories, riddles & jokes. He was born on August 4, 1930 in Vallonia, IN to the late William & Agnes Hehman Teulker. He was a life-long resident of Jackson County. On October 18, 1953, he married Mildred Clara Darlage and she survives in Brownstown. Together they were blessed with 5 children, Joyce (Mark) Sommers of Brownstown, Phyllis (Bill) Brooks of Paris Crossing, Lester Lynn (Sherry Lea) Teulker of Brownstown, Kevin (Suzanne) Teulker of Wabash, and Brian Teulker of Brownstown; also surviving are 11 grandchildren, Chad (Emily) Sommers, Amie (Casey) Coop, Adam (Erin) Brooks, Kelly (Jeremy) Dulaney, Samuel (Nanda) Brooks, Peter Brooks, Natalie (Eric) VanZudien, Amber Teulker, Josh (Madi) Teulker, Kayla Teulker, & Kloe Teulker; 16 great grandchildren; 1 sister, Mentoria Russell of Vallonia. He was preceded in death by his parents and 1 sister, Catherine Melloncamp. Funeral Services will be conducted Friday, August 18, 2017 at 11:00 a.m. at St. Peter’s Lutheran Church in Brownstown with Pastor Jeremy Yeadon officiating. Friends may visit at Johnson Funeral Home on Thursday, August 17th from 4-8 p.m. and on Friday from 10:00 a.m. until service time at the church. Burial will take place in the St. Peter’s Lutheran Cemetery with full military graveside rites. Memorial contributions may be given to St. Peter’s Lutheran Church or the Hoosier Christian Village. Online condolences may be expressed at www.Johnsonfh.net

Norman William Teulker, 87, of Brownstown, died at 5:10 p.m. August 14, 2017 at the Hoosier Christian Village after being ill for 4 &#189; years. He was a veteran of the U.S. Naval Airforce and served during the Korean War. He was a member of... View Obituary & Service Information

The family of Norman William Teulker created this Life Tributes page to make it easy to share your memories.

Send flowers to the Teulker family.