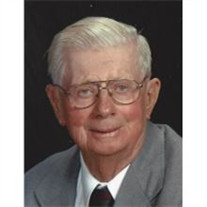 Neal W. Stuckwish, 91, of Vallonia, died Saturday, January 25, 2014 at 10:40 a.m. at his home. He had been ill for 2 months. He was a staff sergeant for the US Army from 1944 to 1946. He was a member at Trinity Lutheran Church, Vallonia. Mr. Stuckwish was a farmer. He was a founding member and on the board of Directors for the Indiana Vegetable Growers. He was also a member of the American Legion of Brownstown. Mr. Stuckwish was born May 15, 1922 in Vallonia to the late Frederick & Ida Stahl Stuckwish. On June 19, 1949 at the Trinity Lutheran Church in Vallonia, he married the love of his life, Rachel Peters and she died February 6, 2011. Along side his wife of 62 years, Mr. Stuckwish raised a family and built a thriving farm. Over their life together they loved travelling the country. They visited every state, travelled to Mexico and Canada, and visited Europe 3 times. For well over 25 years, they made annual trips to Disney in Orlando, Florida with all of their children and grandchildren. Their farm, family and travels together is what made their life together so special. Other survivors include his children, Lonn (Cheryl) Stuckwish, Teresa (Bill) Ticen, & Vernon Stuckwish all of Vallonia; 1 sister, Rosalyn Wessel of Brownstown; 7 grandchildren, Sara (Chris) Jacobi, Emily (Matthew) Anderson, Amy (Chadd) Sutherland, Lindsey Zabel and fianc̩ Jason Roeder, Ryan (Kelli) Stuckwish, Alyssa (John) Schumm, & Kyle Brune; 7 great grandchildren, Abigail & Drew Jacobi, Sophie & Taylor Anderson, Kiley Zabel, Jackson Sutherland, & Brandon Stuckwish; 1 son-in-law, Gene Brune. He was preceded in death by his wife, 1 daughter Cheryl Brune, 3 brothers, Leland, Lloyd, & Kenneth Stuckwish, 2 sisters, Judith Nicholson & Olive Stuckwish. Funeral Services will be conducted Thursday, January 30, 2014 at 11 a.m. at the Trinity Lutheran Church, Vallonia with the Pastor Eric Ahlemeyer officiating. Friends may call from 4-8 p.m. Wednesday at Johnson Funeral Home and from 10 a.m. until service time Thursday at the Church. Burial will take place at the Trinity Lutheran Cemetery. Memorials may be given the Trinity Lutheran Church of to the March of Dimes. Full Military Graveside Services will be conducted. Online condolences may be expressed at Johnsonfh.net. Arrangements by Johnson Funeral Home. Service: 11:00 a.m. Thursday, January 30, 2014 Trinity Lutheran Church Visitation: 4-8 p.m. Wednesday, January 29, 2014 Johnson Funeral Home

The family of Neal W. Stuckwish created this Life Tributes page to make it easy to share your memories.

Send flowers to the Stuckwish family.