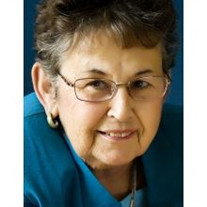 Johnson Funeral Home 2005 South Main Street Vallonia, Indiana 47281 812-358-3341 Minnie Ilean Tiemeyer, 82, of Vallonia, died Wednesday, August 17, 2016, at 6:00 a.m. at the Hoosier Christian Village in Brownstown. She had been ill for several years. She was a member of the Halyesburg Nazarene Church and the Brownstown Order of Eastern Star. Minnie started working at an early age as a waitress at Shipley Restaurant in Brownstown and later worked for several years at Seymour Manufacturing. She also did Home Health Care for several ladies. She later opened a produce stand there at the farm, where she sold flowers and produce. This was very successful and she had lots of faithful customers and made many friends. She was an excellent cook (most known for her cobblers, fried chicken and noodles) and prepared huge meals for family & friends. During her bout with Parkinson’s Disease, she maintained her strong Christian faith and witnessed to anyone she had the opportunity to. She will be greatly missed. She was born June 23, 1934 in Washington Co. to the late Clifford & Nellie Dixon Wheeler. She has lived all of her life Vallonia, IN. She married Glenn Ivan Tiemeyer on November 29, 1952 in Brownstown and he died on January 13, 2014. Other survivors include 2 sons, Lynn Ivan (Sheryl) Tiemeyer of Vallonia and Timothy Jay (Jane) Tiemeyer of Vallonia; sisters, Bonnie Killey, Marie Sterling, Barbara Sue Lindsey, Priscilla Ann Beck all of Vallonia; sister-n-law, Maxine Wheeler of Brownstown; 5 grandchildren, Luke (Melody Gruber) & Ben (Jodi) Tiemeyer, Jessica (Jason) Zotz, Katie & Kourtney (Zack Clark) Tiemeyer; 8 great grandchildren, Jalen, Kiernan, Quentin, Gavin & Will Tiemeyer and Colin, Ethan & Jackson Zotz; many nieces and nephews. She was preceded in death by her parents, husband, and 3 brothers, Ervin, Don & Tommy Wheeler. Funeral Services will be conducted Saturday, August 20th at Johnson Funeral Home at 1 p.m. with Jerry Wheeler officiating. Friends may call Saturday from 10 a.m. until service time. Burial will take place at the Vallonia Cemetery. Memorial Contributions may be made to the Schneck Foundation or the Hoosier Christian Village. Condolences may be expressed at Johnsonfh.net. Arrangements by Johnson Funeral Home in Vallonia.

The family of Minnie Ilean Tiemeyer created this Life Tributes page to make it easy to share your memories.

Send flowers to the Tiemeyer family.