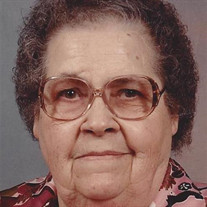 Mary Louise Thixton, 93, of Brownstown, died at 10:50 p.m. Wednesday, May 30, 2018 at the Hoosier Christian Village. She had been ill for 2 ½ years. She attended Brownstown Church of the Nazarene. She worked at the Canning Factory in Ewing, Curry’s Egg Farm and then retired from EMC Plastics in 1987. From 2002-2007 she was a foster grandparent for Brownstown Preschool and all the kids called her Grandma. Mary was known for all the beautiful flowers she planted and had on her patio at her home in Brownstown. She also loved and adored her dog, Phoebe. She was born on October 16, 1924 in Brookland, IN to the late Hubert & Eva Lonsberry Lambert. On December 9, 1944 in Medora she married Melvin O. Thixton and he preceded her in death on March 17, 2000. Survivors include her 2 daughters, Carolyn (Kenneth) Hauck of Seymour and Myra (Dean) Johnson of Cortland; grandchildren, Scott Johnson, Michael Hauck, Danny Jones & Kim Jones; great grandchildren, Kaylynn, Kaidan, & Kennedy; brother, James Lambert, Sr. of Vallonia; 3 sisters, Irene Bledsoe, Crothersville, Beulah Wheeler, Seymour, & Phyllis Clampitt, Medora; several nieces & nephews also survive. She was preceded in death by her parents, husband, a son—Jerry Thixton, an infant brother and sister, brothers, Carl Dean Lambert & Lyman Lambert, & sisters, Virginia Branaman & Christine Smith. Funeral Services will be conducted at 1:00 p.m. Monday, June 4, 2018 at Johnson Funeral Home with Steve Barrett officiating. Friends may call Monday at the funeral home from 10:00 a.m. until service time. Burial will take place at Proctor Cemetery/Dixon Chapel. Memorial Contributions may be given to Red Sky Rescue. Online condolences may be expressed at www.Johnsonfh.net

Mary Louise Thixton, 93, of Brownstown, died at 10:50 p.m. Wednesday, May 30, 2018 at the Hoosier Christian Village. She had been ill for 2 ½ years. She attended Brownstown Church of the Nazarene. She worked at the Canning Factory in Ewing,... View Obituary & Service Information

The family of Mary Louise Thixton created this Life Tributes page to make it easy to share your memories.

Send flowers to the Thixton family.