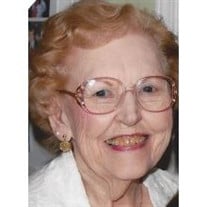 Mary Margaret Hunsucker, 94, of Vallonia, died unexpectedly at 2:03 p.m. March 10, 2014 at Methodist Hospital, Indianapolis, IN. She was a member of Vallonia Christian Church. She was also a member of the Eastern Star for over 60 years and a member of the White Shrine. Mrs. Hunsucker was once employed with the County Auditor's Office, Morgan's Canning factory where she worked in the office for 15 years, and L.S. Ayres office in Indianapolis. She graduated from Vallonia High School in 1937 and Indiana Business College in 1939. She was born on April 19, 1919 in Vallonia to the late Earl William Stage and Clara B. Stotz Stage. She lived most of her life in Jackson County. She married John Emerson Hunsucker on November 11, 1953 in Indianapolis, IN and he survives. Other survivors include 2 sons, Gary L. Hunsucker of Ellettsville, IN and William D. "Bill" Hunsucker of Vallonia; 3 grandchildren, Matt L. Hunsucker, Danelle L. West & Laura A. Hunsucker all of Ellettsville; 2 great grandchildren, Nelia J. Hunsucker & Emma B. West. She was preceded in death by her parents, a brother, Calvin Stage and a sister Ruby Stage Gregor. Funeral Services will be conducted Saturday, March 15, 2014 at 1 p.m. at the Vallonia Christian Church with Chris Criminger officiating. Friends may call from 2-8 p.m. Friday at Vallonia Christian Church and from 11 until service time Saturday. Burial will take place at the Vallonia Cemetery. Memorial contributions may be given to the Salvation Army or to Riley Children's Hospital. Mrs. Hunsucker was described by her sons as a mother who wanted nothing but the best for her children and grandchildren. She was always an encourager, never ever critical, and always had a great outlook on life. She always gave much more than she received and that's the way she wanted it. Mary was a great artist, letter writer, and always sent cards and loved to take care of those in need or who had fallen ill. She was a great contributor and supporter to the Salvation Army and Riley Children's Hospital. She loved to play the piano and went to the Hoosier Christian Village and Heritage House of Seymour to play for the residents. Online condolences may be expressed at Johnsonfh.net. Arrangements by Johnson Funeral Home. Service: Saturday, March 15, 2014 at 1pm Vallonia Christian Church Visitation: Friday, March 14, 2014 from 2-8pm Saturday, March 15, 2014 from 11am-1pm Vallonia Christian Church

Mary Margaret Hunsucker, 94, of Vallonia, died unexpectedly at 2:03 p.m. March 10, 2014 at Methodist Hospital, Indianapolis, IN. She was a member of Vallonia Christian Church. She was also a member of the Eastern Star for over 60 years and a... View Obituary & Service Information

The family of Mary Margaret Hunsucker created this Life Tributes page to make it easy to share your memories.

Send flowers to the Hunsucker family.