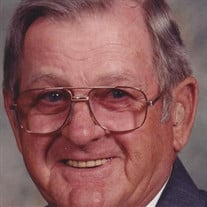 Marvin Alvin “Mick” Hackman, 89, of Vallonia, died at 12:50 a.m. Monday, August 06, 2018 at the Hoosier Christian Village. He had been ill for a year and a half. Mick was born on November 16, 1928 in Vallonia to the late Arthur and Emma Borcherding Hackman. On February 19, 1950, in Seymour he married Norma Louise Snyder and she preceded in death on July 5, 2006. Mick was the oldest male member of Trinity Lutheran Church and held many offices and served on several committees during his lifetime membership there. He was a farmer and a Pioneer Dealer. Mick was most known for his love of growing melons and selling them at his home. He had been a former member of the Vallonia Lions Club, served on a past United Way Board and Zoning Board of Appeals. Mick also had a love for square dancing. Survivors include his son, Gary (Cathy) Hackman of Vallonia; grandchildren, Daphne Waskom, K.C. (Melissa) Hackman, Michael (Jessica) Cunningham, Michelle (Chuck) Sorrell, Mohamed (Tonya) Taguri & Leila (Scott) Modetz; great grandchildren, Brady & Caden Waskom, Zuri Modetz, Taigur & Taicen Taguri, Kinlee, Kyler, & Kamdyn Hackman, Callie & Breanna Lou Sorrell ; sisters, Wilma (Leroy) Miller of Wegan and Juanita Wessel of Vallonia; 2 son-in-laws, Ron Cunningham & Abdu Taguri. Mick was preceded in death by his parents, wife, a brother, Lowell Robert Hackman, & 2 daughters—Pamela Cunningham & Brenda Taguri. Funeral Services will be conducted Thursday, August 9th at 11:00 a.m. at the Trinity Lutheran Church in Vallonia with Pastor Jordan McKinley officiating. Friends may visit at Johnson Funeral Home on Wednesday, August 8th from 4-8 p.m. and on Thursday from 10:00 a.m. until time of the service at the church. Burial will take place at the Trinity Lutheran Cemetery. Memorial contributions may be given to Trinity Lutheran Church, Schneck Medical Center Hospice or to the Hoosier Christian Village. Online condolences may be expressed at www.Johnsonfh.net

The family of Marvin Alvin "Mick" Hackman created this Life Tributes page to make it easy to share your memories.