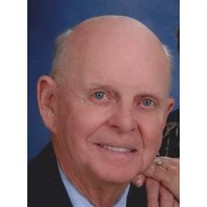 Leland Russell Bundy, Jr., 79, of Brownstown, died at 5:25 a.m. on Friday, August 07, 2015 at his home. He had been ill for 5 years. Mr. Bundy was a US Army Veteran and served from 1954-1956. He was a member of the Vallonia United Methodist Church. He was President of Bundy Brothers and Sons Milling Co. He was a member of the National Rifle Association, 32degree Mason, Shriner and director at Medora State Bank. He was a graduate of Vallonia High School and then attended Eastern Kentucky. Mr. Bundy enjoyed life to its fullest. He loved his work, traveling, and spending time with his grandson Ethan Mr. Bundy was born September 1, 1935 in Vallonia, IN to the late Leland & Florence Jackson Bundy. He lived all of his life in Jackson Co., IN. On August 24, 1963 he married Patricia E. Speckner at St. Ambrose Catholic Church in Seymour and she survives in Brownstown. Other survivors include 2 sons, Larry L. (Lizbeth) Bundy of Freetown and Michael J. (Beth) Bundy of Brownstown; 1 grandson, Ethan Michael Bundy; a sister, Virginia (Jonathon) Robertson of Brownstown; 2 nephews, Joe (Karen) Robertson, Jon Robertson; 1 niece Jill (Scott) Riddle. He was preceded in death by his parents and a brother-in-law, Jonathon Robertson. Friends may call Monday from 9-11 a.m. at Johnson Funeral Home. Funeral Services will be conducted Monday at 11 a.m. with Rev. Jack Suits officiating. Burial will take place in the Vallonia Cemetery. In Lieu of flowers the family has requested that memorial contributions be given to Vallonia United Methodist Church, St. Ambrose Catholic Church or Schneck Medical Center. Online condolences may be expressed at www.Johnsonfh.net Service: 11:00 am Monday, August 10, 2015 Johnson Funeral Home Visitation: 9-11 am Monday, August 10, 2015 Johnson Funeral Home

The family of Leland Russell Bundy, JR created this Life Tributes page to make it easy to share your memories.