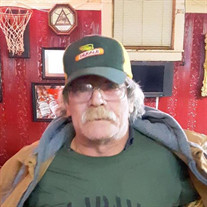 Lamar Jennings Anderson, 61, of Vallonia, died unexpectedly at 9:34 p.m. Friday, April 19, 2019. He was an Army Veteran serving from 1976-1980 and stationed in Ft. Knox, KY. Lamar was of the Baptist faith. He drove a truck for Premier One. He enjoyed yard work, talking about his days in the Army and loved tinkering with CB radios. Lamar was born on May 21, 1957 in Panama City, FL to the late Wilbur Lloyd Anderson & Louise Heath Anderson. He married Sandy Harman Marco-Anderson on November 25, 2004 in Seymour, IN and she survives in Vallonia, IN. Survivors include a children, Brett, Andrea & Kelly, Shane Maxwell; several grandchildren; brothers, Buddy, Pete, David, Ernest, Bobby, Allen, & Larry Anderson; sisters, Diane, Evelyn & Mary. Visitation for Lamar will be held on Thursday, April 25th from 4 p.m. until 7 p.m. at Johnson Funeral Home, Vallonia. At 7 p.m. Military Honors will be held outside the funeral home.

The family of Lamar Jennings Anderson created this Life Tributes page to make it easy to share your memories.

Send flowers to the Anderson family.