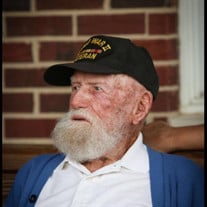 Joseph E. Smart, Jr., age 100, of Vallonia and formerly of Louisville, KY, died at 7:20 a.m. Monday, January 18, 2021 at his home. Joseph was born on August 21, 1920 in Louisville, KY to the late Joseph E. Smart Sr. & Marguerite P. Portman. On January 17, 1959 in Louisville, KY he married Mae “Darlaine” Piatt and she preceded him in death on July 11, 2009 after 50 years of marriage. Joseph was a WWII Veteran and served in the 3rd Division Marines in the 21st Battalion/Company Pacific. He drove a truck his whole life and worked for multiple companies and retired from Dohrn Transfer Company in Louisville. He also drove for bus lines before the war and shortly after the war. Survivors include his daughters; Joyce Bunnel, Tina Timberlake-Whitaker, & Jeannie (Ray) Redicker; 15 grandchildren; 22 great grandchildren; a sister, Mary Jane Gaynor; sister-in-law, Mary Beth Smart; and a multitude of nieces and nephews. Joseph was preceded in death by his parents, wife, a son—Joseph E. Smart III, brothers—Frank “Buddy” Smart, James Smart, & John “Jack” Smart. Funeral Services will be conducted at 11:00 a.m. on Thursday, January 21, 2021 at Trinity Lutheran Church, Vallonia with Pastor Jordan McKinley officiating. Friends may visit with the family on Thursday from 9:00 a.m. until service time at the Church. Due to the Covid 19 pandemic, Johnson Funeral Home will be practicing social distancing according to the CDC guidelines and masks are required to be worn during your visit to the Church. Interment will take place at Calvary Cemetery in Louisville, KY. Memorial contributions may be given to Mass of the Air. Online condolences may be expressed at www.johnsonfh.net.

The family of Joseph E. Smart Jr. created this Life Tributes page to make it easy to share your memories.

Send flowers to the Smart family.