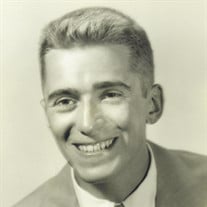 John Emerson Hunsucker, 93, of Vallonia, died at 11:43 p.m. on Friday, January 17, 2020 at the Covered Bridge Health Campus, Seymour. He was an Army Veteran and served in the Air Corps during WWII. He was a member of the Vallonia Christian Church and former member of the American Legion in Brownstown and the Presbyterian Brotherhood. John graduated high school in Champaign, IL and then attended the University of Illinois and Purdue University. He worked for several Aircraft companies in California, was an electrician, and then retired as a Mechanic from Cummins Engine Company. John enjoyed swimming, classical music, aircraft & automobiles. John was born on November 30, 1926 in Champaign, IL to the late Hubert Hunsucker and Helen Herbst Hunsucker. On November 11, 1953 in Indianapolis, IN he married Mary Margaret Stage Hunsucker and she preceded in death on March 10, 2014. His survivors include 2 sons—Gary L. (Pam) Hunsucker of Ellettsville, IN and William D. “Bill” Hunsucker of Vallonia; 3 grandchildren—Matt L. (Jami) Hunsucker, Danelle L. (Andy) Clark & Laura A. Hunsucker (JT Lejeune); great grandchildren—Nelia J. Hunsucker, Emma B. West, Everleigh Clark, Gabriel & Huxley Hunsucker; a twin sister—Barbara “Jenni” Green of San Fransisco, CA. Funeral Services for John will be conducted on Tuesday, January 21st at 1:00 p.m. at Johnson Funeral Home, Vallonia with Chris Criminger officiating. Friends may visit with the family on Tuesday from 10:00 a.m. until service time. Burial will take place at the Vallonia Cemetery with military graveside rites. Memorial contributions may be given to Riley Children’s Hospital or to the Salvation Army. The Hunsucker family would like to express their gratitude to the staff at Covered Bridge Health Campus and Hospice for their loving care and attention to their dad. Online condolences may be expressed at www.johnsonfh.net.

John Emerson Hunsucker, 93, of Vallonia, died at 11:43 p.m. on Friday, January 17, 2020 at the Covered Bridge Health Campus, Seymour. He was an Army Veteran and served in the Air Corps during WWII. He was a member of the Vallonia Christian... View Obituary & Service Information

The family of John Emerson Hunsucker created this Life Tributes page to make it easy to share your memories.

Send flowers to the Hunsucker family.