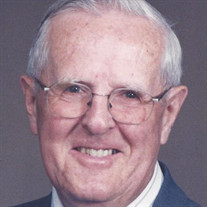 John Henry Hamson, 93, of Brownstown (formerly of Danvers & Lynn, MA) died Monday, April 23, 2018 at 8:17 a.m. at the Lutheran Community Home, Seymour. He had been ill for one year. John served with the Coast Guard in the Pacific during WWII. He was a devout member of Our Lady of Providence/St. Ambrose Catholic Church (previously of St. Mary’s and St. Pius Churches of Lynn, MA). He was a graduate of St. Mary’s in Lynn, MA, where he was president of his class. He also ran class reunions for over 60 years. Through high school, John competed nationally in the Drum & Bugle Corp of Salem, MA. He was later a business graduate of Boston University. Mr. Hamson’s profession was that of business manager for Dickie Raymonds and Winthrop Services printing companies in Boston, MA. In younger years he was a member of the Auxiliary Police Force in Lynn, MA. In later years, John was very active in the Senior Center of Danvers, MA, where he especially enjoyed playing golf. He was very fond of the golfing group known as the Nomads, which he helped form and run. John also enjoyed bowling, pool, bingo, and reading. Mr. Hamson’s biggest love was his family…………including the extended Disque and Mynahan families. Mr. Hamson was born on August 12, 1924 in Lynn, MA to the late Perley & Katherine Garrity Hamson. On August 29, 1948, he married the love of his life, Lillian Theresa Mynahan and they enjoyed 60 years of marriage. Lillian preceded him in death on March 15, 2009. John is survived by his 3 children: Ellen Koopman of Lady Lake, FL, Barry Hamson of Brownstown, IN, and Brian Hamson of North Vernon, IN; Grandchildren; Joshua J. & Carl F. Koopman, Meghan Zinck Palleria, & Scott Zinck; One great grandchild, Eva Palleria; Daughter-in-law, Nancy Zinck Hamson; Numerous nieces, nephews, and cousins. Mr. Hamson was preceded in death by his parents, wife, a son, John Joseph Hamson, and a sister and brother-in-law, Eunice & John Disque. A Memorial Mass will be held Saturday, May 5, 2018, at 10:00 a.m. at the St. Ambrose Catholic Church, Seymour, with Father Daniel Staublin officiating. A reception will be held at the Knights of Columbus of Seymour after the Mass. Burial and a Memorial Mass will be held at St. Mary’s, Lynn, MA in July of 2018. Memorial Contributions may be given to Schneck Medical Center Hospice, 411 W. Tipton St., Seymour, IN 47274 or to St. Ambrose Catholic Church, 325 S. Chestnut St., Seymour, IN 47274. Funeral arrangements are being handled by Johnson Funeral Home, Vallonia. Online condolences may be expressed at www.Johnsonfh.net

John Henry Hamson, 93, of Brownstown (formerly of Danvers & Lynn, MA) died Monday, April 23, 2018 at 8:17 a.m. at the Lutheran Community Home, Seymour. He had been ill for one year. John served with the Coast Guard in the Pacific during WWII.... View Obituary & Service Information

The family of John Henry Hamson created this Life Tributes page to make it easy to share your memories.

Send flowers to the Hamson family.