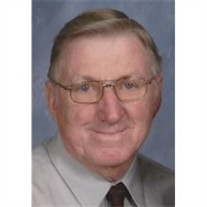 James Ronald Shoemaker, 77, of Vallonia, died at 12:33 p.m. at his residence on Saturday, August 2, 2014. He was a veteran of the United States Army and served from 1958 until 1960 as a Military Police Officer in Ft. Lewis, Washington. He was... View Obituary & Service Information

The family of James Ronald Shoemaker created this Life Tributes page to make it easy to share your memories.

Send flowers to the Shoemaker family.