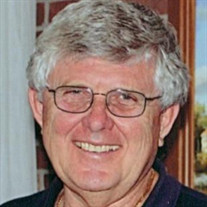 James Martin Frische “Jim”, 78, of Trafalgar, Indiana, passed away peacefully from Parkinson’s at his home of 42 years on Lamb Lake in Johnson County surrounded by his loving family on Sunday, May 3rd, 2020. Jim was born on June 15th, 1941 on his family’s farm to the late Francis and Edna “Kerkhof” Frische. Jim was a graduate of Cortland High School in 1959, where he played basketball and baseball. He met his loving wife Dorcas Trimpe while in high school. They were married on September 2nd, 1962 and celebrated their 57th wedding anniversary in 2019. Following high school, Jim attended Purdue University where he received a bachelor and a master’s degree in industrial engineering. He was in ROTC for four years while attending Purdue. After he graduated, he went into active duty in February 1965. He was stationed in Maryland and Texas for training before he was deployed to Vietnam in September 1965. He served in Vietnam as a U.S. Army Ordnance Corps lieutenant with the 1st cavalry division. He was awarded the bronze star following his service. After his military service he returned to Indiana where he was an industrial engineer, then plant manager, and eventually director of manufacturing operations at RCA records in Indianapolis. He worked there for several years and made many lifetime friends. He received an MBA from Butler University while working at RCA. He then joined Sony in 1982 as the first employee of Sony Digital Audio Disc Corporation as Vice President and General Manager. He oversaw construction of the first compact disc plant in the United States in Terre Haute, Indiana. He later became Chairman and Chief Executive Officer at Sony DADC overseeing all manufacturing plants in the Western Hemisphere. This required weekly travel between plants and his office in New York City. Jim received an Honorary Doctorate degree of Engineering from Purdue University in 1994. He served on many committees at Purdue University. He was on the board at St. Mary of the Woods and Franklin College. He received many awards throughout his career including the Sagamore of the Wabash award. During his youth he played piano for sunday school and joined his mother, an organist, at White Creek Methodist Church in Indiana. He was a member of First Presbyterian Church in Franklin, Indiana for 42 years where he served on church committees and taught adult sunday school for over 30 years with his wife Dorcas. Jim enjoyed fishing, gardening, and especially golfing. He golfed at numerous golf courses across the U.S. He was a sports lover and attended many Indy 500 races, Pacers games, and Colts games where he held season tickets since 1984. Jim had many friends and continued spending time with them throughout his life. He was dedicated family man and took his family to the beach for over 20 years. He adored the family kickball games at home where it was grandkids versus adults. Jim and Dorcas attended numerous recitals, sporting, and band events of their children and grandchildren. Jim was a loving and devoted husband, father, grandfather, and great-grandfather. He is survived by his wife Dorcas and their four children: David (Emily) Frische, Cynthia (Mark) Howell, Christina (John) Hurlow, and Daniel (Molly) Frische. He is survived by 14 grandchildren. Rachel, Paul Grant, Gavin (Lauren), and Garrett Ankney. Noah, Seth, and Chloe Howell. Benjamin and Nicholas Frische. Mason, Halle, and Maddox Frische. John Ethan and Ella Hurlow. He is survived by two great-grandchildren, Ivy and Zuvi Ankney. He is survived by a brother, John (Wilma) Frische. He is also survived by brother and sister in-law’s Philip (Margie) Trimpe, Timothy (Sandy) Trimpe, and Vicki Trimpe. He was preceded in death by his parents, Paul Ankney (son in-law), and Bill Trimpe (brother in-law). The family wishes to express their gratitude and thankfulness to dedicated caretakers including Dr. David Josephson, Dr. Todd Dudley, and Tim Fulmer. Pastor Peter Jessen will conduct a private memorial service for family in church on Tuesday, May 12th, 2020. A celebration of life will be held at a later date. Memorial contributions in Jim’s memory can be made to First Presbyterian Church in Franklin, Indiana, Wheeler Mission in Indianapolis, or the Parkinson’s Foundation and mail your donation to Johnson Funeral Home, 2005 S. Main St. Vallonia, IN 47281. He will be greatly missed by family and friends. Online condolences may be expressed at johnsonfh.net.

James Martin Frische &#8220;Jim&#8221;, 78, of Trafalgar, Indiana, passed away peacefully from Parkinson&#8217;s at his home of 42 years on Lamb Lake in Johnson County surrounded by his loving family on Sunday, May 3rd, 2020. Jim was born on... View Obituary & Service Information

The family of James Martin "Jim" Frische created this Life Tributes page to make it easy to share your memories.

Send flowers to the Frische family.