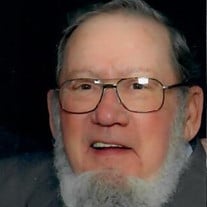 Harvey Franklin “Old Goat” Maurer, 87, of Brownstown died at 11:08 a.m. at IU Methodist Hospital in Indianapolis. He was a member of Vallonia Christian Church, Eagles, VFW, AMVET, Moose Lodge, American Legion, and the Boat Club of Bedford. He worked for Seymour Glass, was owner of Harv’s Glass and sub-contracted work for Kieffer Paper Mill, and worked for Vallonia Tree Nursery. The “Old Goat” was a Jack of all trades & master of most and loved piddling around. He enjoyed playing Cribbage & Rummy. Harvey was born on April 15, 1933 in Ft. Branch, IN to the late Victor Phillip & Lorene Market Maurer. He was a US Navy Veteran and served 16 years during the Korean & Vietnam Wars. He married Ronelle Naomi Swartz Maurer on July 18, 1953 in Evansville, IN and she survives in Brownstown. Other survivors include 4 children—Linda Lee (Evan) Tatlock of Seymour, Ralph Edward (Carolyn) Maurer of Seymour, Victor Ronald (Fran) Maurer of Brownstown, & Pastor Timothy Don (Julie) Maurer of Ashton, Idaho; grandchildren—Mark (Christy) Crane, Becky (Buck) Black, Matthew Maurer, & Nicholas Maurer, great grandchildren—Ethan Crane & Emily Williams; several step grandchildren and great grandchildren. Harvey was preceded in death by his parents, 3 brothers—Raymond, Robert, & Harold Maurer, and a son-in-law—Michael “Tiny” Crane. Private services for the “Old Goat” will be held at Johnson Funeral Home with Chris Criminger officiating. Burial will take place at the Vallonia Cemetery with full military graveside rites. Memorials may be given to Vallonia Christian Church or to the Hoosier Christian Village and can be mail to Johnson Funeral Home P.O. Box 24 Vallonia, IN 47281. A celebration of life will be held at a later date. Online condolences may be expressed at www.johnsonfh.net.

The family of Harvey Franklin "Old Goat" Maurer created this Life Tributes page to make it easy to share your memories.

Send flowers to the Maurer family.