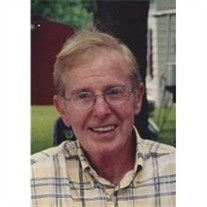 Johnson Funeral Home 2005 South Main Street Vallonia, Indiana 47281 812-358-3341 Harry Oliver Northern, 83, of Vallonia, died at 3:26 a.m. Saturday, April 04, 2015, at his home. He had had an extended illness. He was a member of the Driftwood Christian Church. Mr. Northern was an Electrical Engineer/test engineer of Allison Gas Turbine Engines for 37 years. His working career at Allison's took him to many different countries. He co-oped his way through college and graduated in 1955 from Georgia Tech. He was born August 13, 1931 in Chattanooga, TN to the late Harry O. Northern and Roberta Abel Northern. He has lived in Jackson County since 1990. He married Dinah Jamison Canary on July 5, 1986 at the Driftwood Christian Church in Vallonia and she survives at their home in Vallonia. Other survivors include 4 children, Bruce Northern of Lawrence, IN, Brenda Maggard of Morgantown, IN, Shannon Canary Parker of Brownstown, and Shawn Canary of Greenwood; grandchildren, Anthony G. Maggard and Brett Maggard of Franklin, Bruce A. Northern of Lawrence, Kaycee Northern & Will Parker of Coffeeville, KS, Jamison Parker and Layden Canary of Brownstown; a brother, Brooks C. (Mary Alice) Northern of Chattanooga, TN. He was preceded in death by his parents, a son, Bryan G. Northern and a sister, Marjorie Sehr. A Memorial service will be held Saturday, April 11th, 2015 at 2:00 p.m. at the Driftwood Christian Church with Steve Gommel officiating. Friends may call from 1 until time of service at the church. Memorial contributions may be given to Jamison Harrell Family Cemetery, Schneck Medical Center Hospice or Driftwood Christian Church. Harry loved the Lord and served as an elder, deacon and teacher in Clermont Christian Church, Franklin Memorial Christian Church, Bethany Christian Church and Driftwood Christian Church. Mr. Northern loved to read his bible and study chemistry, science, and human anatomy. He was most happy spending time with family and friends and viewing God's beautiful creation. As a young man, he once blew up his attic bedroom experimenting with flash powder. Harry was always curious and asked many questions to family and friends (to which most did not know the answers) and was told he could ask God when they met. Online condolences may be made at Johnsonfh.net Service: Saturday, April 11, 2015 at 2:00 p.m. Driftwood Christian Church Visitation: Saturday, April 11, 2015 from 1:00 p.m. until service time. Driftwood Christian Church

The family of Harry Oliver Northern created this Life Tributes page to make it easy to share your memories.

Send flowers to the Northern family.