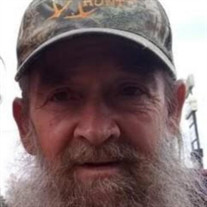 Harold Dean “Shorty/Baldy” Bowman, Sr., 74, of Sparksville, IN, went to his heavenly home on Sunday, February 13, 2022, at approximately 6:30 a.m. Passing peacefully at his daughter’s home, he was surrounded by his loving family, after being ill for several months. He was born on September 7,1947, in Salem, IN to the late Elmer Bowman & Janie (Minton) Bowman. He was the fifth of 11 children. Harold married Connie Sue Rose in 1970, and the couple had 2 sons. They divorced in 1982. Harold went on to marry Mary Root on July 11, 1983, and gained 3 step children whom he always loved as his own. The couple was together for 28 years until they divorced in 2010. Their love for each other never truly ended. Harold worked for the Medora Brickyard until it closed. He was an avid fisherman, spending as much time as he could on the White River. He could usually be found on the river running trot lines for catfish, camping, and tossing back a few beers with friends. He also loved to hunt, cook, and spend time with his family. He especially enjoyed being able to teach his knowledge of hunting and fishing to his children, grandchildren and great grandchildren. He is survived by his 4 sons: James Dale (Greta) Bowman of Freetown, Harold Dean (Nadine) Bowman of Seymour, Anthony Allen Root of Seymour, and Michael (Makenzie) Trinkle of Seymour; one daughter, Mary Ellen (Marty) Jaynes of Seymour; 18 grandchildren and 11 great grandchildren. Other survivors include 3 brothers: Estill (Nadine) Bowman of Haleysburg, Larry (Debbie) Bowman of Edinburgh, and Willie (Bobbi) Bowman of Muncie; 3 sisters: Mary (Wayne) Nowling of Evansville, Elsie (Steve) Smith of Seymour, and Billie Ann McKinney of Seymour. Harold is preceded in death by his parents, 2 brothers: Ordell Kenneth Bowman (who died in infancy) and Elvert Lee Bowman; 2 sisters: Irene Anderson & Judy Caves. Funeral services will be conducted at Johnson Funeral Home, Vallonia, on Thursday, February 17, 2022, at 1:00 p.m. with Brother James Miller and Pastor Marlin Patton officiating. Friends may visit with the family on Wednesday, February 16, 2022, from 5:00-8:00 p.m. and on Thursday from 11:00 a.m. until service time. Burial will take place at White River Valley Cemetery. Online condolences may be expressed at johnsonfh.net.

The family of Harold Dean "Shorty/Baldy" Bowman Sr. created this Life Tributes page to make it easy to share your memories.

Send flowers to the Bowman family.