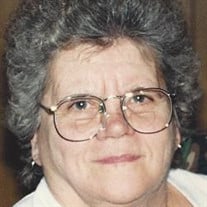 Edna Lambert, 87, of Brownstown, died at 7:35 p.m. Monday, October, 22, 2018 at Schneck Medical Center. She had been in failing health for 6 years. Edna was formerly employed with Rose Acres, Seymour Electronics and Seymour Manufacturing. She... View Obituary & Service Information

The family of Edna Lambert created this Life Tributes page to make it easy to share your memories.

Send flowers to the Lambert family.