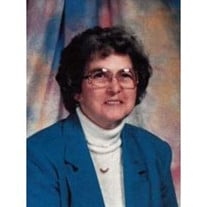 Dorothy Marie Cox Hadley , Age 89 of Brownstown, IN died peacefully at 9:30 am, Friday, April 5 at Hoosier Christian Village after a 5 month illness Member of Brownstown United Methodist Church. She had been a cook for the Brownstown School... View Obituary & Service Information

The family of Dorothy Marie Cox Hadley created this Life Tributes page to make it easy to share your memories.