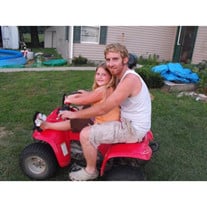 Johnson Funeral Home 2005 South Main Street Vallonia, Indiana 47281 812-358-3341 Derek Irven Monnier, 34, of Brownstown, died unexpectedly on Sunday, June 4, 2017 at his home. We worked for Space Guard in Seymour as a welder and ran saws. He graduated from Wheeler High School in 2001. Derek loved playing with his kids and spending time with his family. He enjoyed fishing, racing, working on cars, hanging with his friends and living life to its fullest. He was born on October 1, 1982 in Valparaiso, IN to Dennis “Sandy” Monnier of Valparaiso and Kathleen Prysock Thompson of Portage, IN. He has lived in Jackson County for 9 years. He married Tiffany Hallett Monnier on July 31, 2010 on the river in Shieldstown. Other survivors include 7 children, Blake Reel, Lilyana Monnier, Gabriella Monnier and Gavin Monnier all of Michigan, Karson Henderson and Mason Monnier both of Brownstown and Sarah Smith of Brownstown; 3 brothers, Marcus Monnier of Seymour, Robert Thompson of Illinios, Paul Ruddick of Brownstown; 3 sisters, Pamela McMeans of Boonegrove, Angela Held of Valparaiso, Angie Sullivan of Seymour. He was preceded in death by his “Mom”, Carol McMeans, who raised him and his grandmother, Gertrude Monnier. Visitation will be held Wednesday, June 7, 2017 from 1-4 p.m. at Johnson Funeral Home, Vallonia followed with the funeral service starting at 4. Minister Dave Semenuk will conduct the service. Memorial Contributions may be given to Tiffany Monnier. Online condolences may be expressed at www.Johnsonfh.net

The family of Derek Irven Monnier created this Life Tributes page to make it easy to share your memories.

Send flowers to the Monnier family.