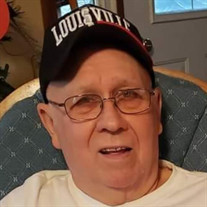 Dennis “Denny” Wienhorst, 78, of Uniontown, died January 31, 2022, at St. Vincent Hospital in Indianapolis. He had suffered from heart problems for several years. Denny was born on August 21, 1943 and raised on a farm in Tampico and later Dudleytown. He was the son of Mentoria (Teulker) Russell of Vallonia and the late Ervin “Pete” Wienhorst. He married Billie Jean (Frazier) on January 23, 1965. She survives, along with their two children Angie Mayfield (Doug), Loogootee, and Kenny Wienhorst (Jennifer), Paris Crossing, and adopted son, Cory Tankersley-Wienhorst. Dennis and Jean have 7 grandchildren: Heavenly Helblig, Briar Helblig, Josey Richart, Whitney Hodge, Lane Wienhorst, Hunter Lawburgh, and Tucker Mayfield, as well as 6 great-grandchildren. Dennis is also survived by two brothers, Dave Wienhorst (Linda), Seymour, and Steve Wienhorst, Vallonia, and two sisters, Sandra “Sue” Angel (Chet), Seymour, and Teresa Wienhorst Johnson, Jeffersonville. He was preceded in death by his father, his brother Mike Russell, several aunts, uncles and friends, and beloved grandparents John and Emma Wienhorst and William and Agnes Teulker. Dennis graduated from Tampico High School in 1961, then joined the Army National Guard, where he was known as an excellent cook and marksman. He began working at Cummins Engine Company in Columbus in 1962, where he was employed for 38 years. Following retirement, he was a supervisor at United Producers livestock yard at Little York for several years. Though confirmed and married at Immanuel Lutheran Church in Dudleytown, Dennis later became a member of Tampico Christian Church, where he enjoyed listening to Reverend Randy King. When he wasn’t working, he liked to trade coon dogs, horses and mules, coon hunt, cook, sit on his porch, and feed his critters, play with his grandchildren, and attend Crothersville basketball games. Denny loved kids, animals, bluegrass music, westerns, basketball, and sale barns. Funeral services for Denny will be conducted on Saturday, February 5, 2022, at 1:00 p.m. at Johnson Funeral Home with Rev. Randy King officiating. Friends may visit with the family on Saturday from 10:00 a.m. until the time of service. Burial will take place at the Vallonia Cemetery. Memorial contributions may be given to the Tampico Christian Church or to Crothersville Athletic Department. Online condolences may be expressed at www.johnsonfh.net

The family of Dennis "Denny" Wienhorst created this Life Tributes page to make it easy to share your memories.

Send flowers to the Wienhorst family.