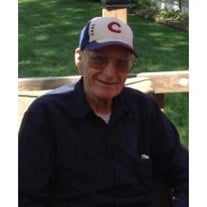 Darwin Reynolds, age 93 residing in Hobart IN, went to be with The Lord on Dec. 20th, 2014. He was born in Haleysburg IN to James Richard and Flaura Maude (Trueblood) Reynolds on August 9, 1921. Darwin is survived by a son, Michael Darwin Reynolds from Griffith, IN and a daughter Debra Lynn (Joe) Marlow from Merrillville IN. He has 7 grandchildren, Michelle Reynolds, Jonathon Marlow, Joseph Ryan Marlow, Joshua Marlow, Matthew Reynolds, Shaina Reynolds, and Taylor Reynolds. He has 3 great-grandchildren Haley Collins, twins Brycen and Rylynn Duron. He was preceded in death by his great-grandson Bentley Michael Mihal Darwin was the ninth born out of 11 siblings. He was preceded in death by 7 brothers and 2 sisters. He has one surviving sibling James Junior Reynolds, who resides in Medora. Darwin was a member of the Medora Wesleyan Church. Darwin served in active duty during World War II in Germany. And he also served in the Air Force. He was a member of the Masonic Lodge in Medora IN. He was retired from Mittal Steel, formerly Inland Steel, after 35 years of service after which time he moved back to Medora. He resided in Medora until an illness in 2012 caused him to have to move back to Northwest IN to be closer to his children. He loved to play cards, hand and foot, euchre and poker were his favorite card games. He also enjoyed camping and fishing. He loved baseball and was an avid Chicago cubs fan. He was a member of the Medora Masonic Lodge #328. Darwin was a very loving and devoted father. He was loved by many. He will be dearly missed by his family and friends. In Lieu of flowers, please make donations to the Medora Wesleyan Church or to the Senior Citizens Bldg. in Medora. Services will be held Saturday, Dec. 27th, 2014 at Johnson's Funeral Home in Vallonia at 1pm with Chuck Morgan officiating. Masonic Services will held at 1pm by the Medora Masonic Lodge #328 at the funeral home on Saturday. Visitation will be held from 10:00 a.m. - 1:00 pm. with funeral services immediately following visitation. Burial will be at Proctor Cemetery. A military service will be held at his final resting place. Service: Saturday, December 27 at 1pm Johnson Funeral Home Visitation: Saturday, December 27 from 10am-1pm Johnson Funeral Home

Darwin Reynolds, age 93 residing in Hobart IN, went to be with The Lord on Dec. 20th, 2014. He was born in Haleysburg IN to James Richard and Flaura Maude (Trueblood) Reynolds on August 9, 1921. Darwin is survived by a son, Michael Darwin Reynolds... View Obituary & Service Information

The family of Darwin Reynolds created this Life Tributes page to make it easy to share your memories.

Darwin Reynolds, age 93 residing in Hobart IN, went to be with...

Send flowers to the Reynolds family.