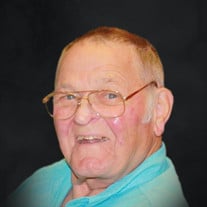 Darrell R. “Cooley” Singer, 80, of Brownstown died at 5:14 p.m. on Thursday, October 15, 2020 at the Schneck Medical Center after a short illness with cancer. Cooley was born in Vallonia on June 21, 1940 to the late Marshall Vance Singer Sr. and Hulda Mae Bowers Singer. He married Barbara Joan Robbins on June 15, 1969 in Seymour, IN and she survives in Brownstown. Cooley was retired from the Indiana State Highway Department. He was a member of the VFW, American Legion, the Moose Lodge and was an inductee of the Hall of Fame at the Brownstown Speedway. Cooley loved anything to do with racing, he was quite the “wheeler & dealer” kind of guy who enjoyed buying and reselling cars and campers. He was a very honest man, never met a stranger and treated everyone he knew the same. Cooley enjoyed making trips to Florida. He loved his family most of all and had a very special place in his heart for his nieces, nephews, and his animals. Survivors include his wife Barb, 2 children, Lauretta L. Singer (Scott McKean) of Huntsville, OH and Brett (Chasidy) Singer of Seymour; a stepson, Anthony J. Robbins (Shirley Huff) of Vallonia; grandchildren, Leslie Horton and Isaac Kannianen both of Seymour; 2 great grandchildren, Landon Jones and Charlee Grace Hawn; 3 sisters, Mary Gayle Toppe of Vallonia, Janet Sue Dixon of Texas, and Gatha Lou Willman Campbell; and several grand-dogs. He was preceded in death by his parents, brothers—Robert Lee “Popeye”, Tommy Neal, Nelson “Nick” Wayne, & Ivan “Pete” Singer; a sister—Goldie Ann Hauer; and 5 half siblings—Marshall “Bud” Singer Jr, Waneta Singer, Imogene Tuelker, Harley Calvin Singer, & Billy Roscoe Singer. Funeral Services for Cooley will be on Wednesday, October 21, 2020 at 11:00 a.m. at Johnson Funeral Home, Vallonia with Larry Robbins officiating. Friends may visit with the family on Tuesday, October 20th from 4:00-8:00 p.m. and on Wednesday from 10:00 a.m. until service time. Burial will take place at the Vallonia Cemetery with full military graveside rites. Memorial contributions may be given to the Seymour Harvest Church or the VFW. Johnson Funeral Home will be practicing social distancing according to the CDC guidelines and masks are encouraged to be worn during your visit to the funeral home. Online condolences may be expressed at www.johnsonfh.net.

The family of Darrell R. "Cooley" Singer created this Life Tributes page to make it easy to share your memories.

Send flowers to the Singer family.