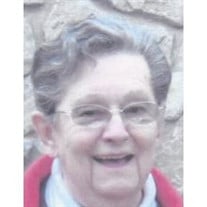 Johnson Funeral Home 2005 South Main Street Vallonia, Indiana 47281 812-358-3341 Conita (Connie) Benton, 84, of Seymour, IN, passed away at 1:55 p.m., peacefully surrounded by her family, on Thursday, October 20, 2016 at her home. Connie was a Homemaker. She was a founding member of the Seymour FOE #655 Auxiliary and a member of the American Legion, VFW, Moose, and Daughters of the American Revolution. She was a bowler for over 50 years and a member of the Seymour Women’s Bowling Hall of Fame. Connie had traveled across the U.S. to participate in several national bowling tournaments. Connie was born in Salem, IN on March 7, 1932 to the late John Wingler and Francis Hattabaugh Wingler. She married Oscar Benton Jr. on August 4, 1951 and preceded her in death in 1995. Survivor’s include her children, Alivia Dockery, JoElla (Herbert) Small, Timothy (Kurt Mason) Benton, and Kevin (Cathy) Benton; her grandchildren, Jeanie (Jim) Lee, Jeremiah Small, Tim (Jeanna) Small, Nick Small, Jessica Benton and Noah Benton; great grandchildren, Shelby & Kelsey Lee, Lilly Small, Sawyer Small, and Jada Foster. Also surviving is her brother, Avis (Shirley) Wingler and a brother-in-law, Kenneth (Nancy) Benton. In addition, she is survived by several nieces and nephews. Connie was preceded in death by her siblings, Ernest, Roscoe (Audry) Wingler, Ruby (Ken) Scherer, Redith (Kermit) Burns, and Maysel (Wayne) Martin. Connie was very proud of her family’s patriotic legacy. Her Father, John fought during WW I; her brother Ernest, fought in WW II and the Korean War; her brother, Roscoe, also fought in WWII; and her brother, Avis did 3 tours in Vietnam. Funeral Services will be conducted on Monday, October 24th at 11 a.m. at Johnson Funeral Home with Chris Criminger officiating. Friends may call from 9 a.m. until time of service Monday. Burial will take place in the Benton Family section of Fairview Cemetery in Brownstown. Memorial Contributions may be given to the Donor’s Choice. Online condolences may be expressed at www.Johnsonfh.net

The family of Conita (Connie) Benton created this Life Tributes page to make it easy to share your memories.

Send flowers to the Benton family.