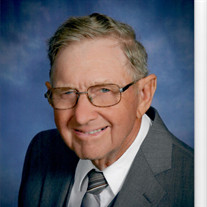 Charles Louis Hackman of Vallonia, passed away peacefully on the morning of April 21, 2020 in his home, at the age of 86. He was born on November 30, 1933 to Victor and Esther (Otting) Hackman. He was baptized on December 10, 1933 and graduated from Vallonia High School in 1951. Charles served in the US Army from 1956-1958. He married Laverne Lambring on April 11, 1964 at St. Peters Lutheran Church in Columbus. The two were blessed with 3 children and enjoyed traveling to all 48 continental states, playing cards, and spending time with their grandchildren. Charles was a full time cattleman and farmer. He enjoyed farming with his brother, and later with his son and eventually with his grandchildren. Charles was known to emphasize the importance of being efficient. He spent countless hours in his shop repairing equipment and engineering unconventional contraptions to make jobs easier. Throughout his entire life, Charles has been a bold Christian witness. He enjoyed sharing his faith with his family and worshipping at St. Paul’s Ev. Lutheran Church, Wegan. Charles was first diagnosed with Stage 4 Cancer in 2011 and gave God and the power of prayer the credit for his longevity. He was preceded in death by his parents, siblings Melba (Victor) Klosterman, Paul (Mary) Hackman, and Alvin (Dorothy) Hackman. He was a loving husband, father, grandfather, and great-grandfather who is survived by: his children Thomas (Ruth) Hackman, Patricia (Scott) Butt, and Miriam (John) Lee; his grandchildren Megan (Chad) VanLiew, Jacquelyn (Klayton) Jasinski, Katherine Butt, Samuel Butt, Adam Lee, Allison Yaeger, Allison Hackman, Benjamin Lee, Victor Hackman, Grant Lee, and great-granddaughter Annie VanLiew. The family will hold a private funeral service, but asks for letters of memories and/or stories to be mailed to Johnson Funeral Home (2005 S. Main Street, Vallonia, Indiana 47281). Memorials and contributions can be made to St. Paul Ev. Lutheran Church, Wegan, Lutheran Central School, Trinity Lutheran High School or Lutheran High School South of St. Louis, MO. They can also be sent to Johnson Funeral Home (2005 S. Main Street, Vallonia, Indiana 47281). Online condolences may be expressed at johnsonfh.com.

Charles Louis Hackman of Vallonia, passed away peacefully on the morning of April 21, 2020 in his home, at the age of 86. He was born on November 30, 1933 to Victor and Esther (Otting) Hackman. He was baptized on December 10, 1933 and graduated... View Obituary & Service Information

The family of Charles Louis Hackman created this Life Tributes page to make it easy to share your memories.

Charles Louis Hackman of Vallonia, passed away peacefully on...