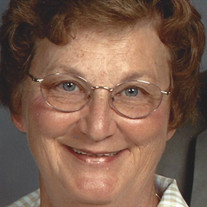 Carolyn Louise Shoemaker, 77, of Vallonia, died at 8:40 a.m. on Tuesday, April 9, 2019 at the Lutheran Community Home. She was a member of Trinity Lutheran Church, Vallonia. She was actively involved in the Lutheran Women&#8217;s Missionary... View Obituary & Service Information

The family of Carolyn Louise Shoemaker created this Life Tributes page to make it easy to share your memories.

Send flowers to the Shoemaker family.