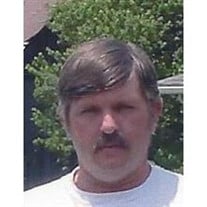 Johnson Funeral Home 2005 South Main Street Vallonia, Indiana 47281 812-358-3341 Boyd Allen Underwood, 54, of Beck’s Mill, Salem, IN, died at 7:25 p.m. Sunday, August 7, 2016 at Floyd Memorial Hospital, New Albany, IN. He had been hurt and ill for years. He attended Salem High School and was a timber cutter and logger all of his life. He loved his farm, gardening and telling jokes. Mr. Underwood was born October 16, 1961 in Seymour, IN to the late Ralph Eugene Underwood Sr., who preceded him in death on November 7, 2009, and Dorothy Marie Wheeler Underwood who lives in Vallonia. He is also survived by brothers, Ralph Eugene Underwood, Jr. of Vallonia, Ricky Dean (Shelby) Underwood of Shelbyville, IN, Warren Edward (Kim) Underwood of Vallonia; one sister, Mamie Ann (David) Boling of Vallonia; a special family friend, Raymond (Pam) Harden of Indianapolis. Mr. Underwood never had the joy of having children of his own, but had been married to Vickie Chastain for years and had 4 step children, Ronnie Chastain—deceased, Roger Chastain, Michael Chastain, & Joseph (Jennifer) Chastain all of Salem. Several nieces, nephews and step grandchildren also survive. He was preceded in death by his father and a niece, Viki Underwood. Funeral Services will be conducted Friday, August 12th at 1;00 p.m. with Matt Roberts officiating. Friends may call Friday from 10:00 a.m. until service time. Burial will take place at the Crown Hill Cemetery in Salem. Memorial contributions may be given to the Floyd Memorial Cancer of Center or to the Underwood Family. Online condolences may be expressed at www.Johnsonfh.net

The family of Boyd Allen Underwood created this Life Tributes page to make it easy to share your memories.

Send flowers to the Underwood family.