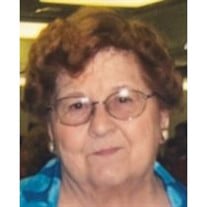 Johnson Funeral Home 2005 South Main Street Vallonia, Indiana 47281 812-358-3341 Avanelle Lane Durham, 90, of Vallonia, died Saturday, December 20, 2014 at 11:40 p.m. at the Covered Bridge Health Campus, Seymour. She was a member of Our Lady of Providence Church in Brownstown and the American Legion Auxiliary Unit 112. She was a graduate of St. Joseph School of Nursing in Missouri. She was born on August 29, 1924 in Tulia, Tesax to the late Ransom Huntley Lane and Margaret Ferguson Mongan. She married Morris W. Durham on December 24, 1944 in Florence, South Carolina and died on August 17, 2003. Survivors include 3 sons, Samuel (Nancy) Durham of Osgood, Donald (Diana Kaye) Durham of Vallonia, and Glenn (Jill) Durham of Vallonia; grandchildren, Tiffany (Nate) Cross, Clinton (Lauren) Durham, Jaclyn (Kyle) Williams, Monica (Eric) Adams, Samuel Durham, Jaylyn Durham, and Chelsea Durham; 5 great granddaughters, Avanelle Cross, Parker Durham, Amelia Williams, Josephine Cross, and Lane Adams. She is preceded in death by her parents, husband, two sisters, and one brother. Funeral services will be conducted Wednesday, December 24, 2014 at 11:00 a.m. at the Johnson Funeral Home, Vallonia. Friends may call from 9 a.m. until service time on Wednesday. Burial will take place at the Fairview Cemetery in Brownstown. Memorial contributions may be given to Joplin, Missouri Area Cathloic Schools. Avanelle enjoyed genealogy, swimming, reading, and the company of her pets. Family, friends and all who knew her will remember her outgoing and joyful personality. She had an amazing ability to connect with anyone; not knowing a stranger and her many stories will live on in the hearts of her family and everyone she touched. Online condolences may be expressed at www.Johnsonfh.net Service: Wednesday, December 24, 2014 at 11:00 a.m. Johnson Funeral Home Visitation: Wednesday December 24, 2014 from 9 to 11 a.m. Johnson Funeral Home

The family of Avanelle Lane Durham created this Life Tributes page to make it easy to share your memories.

Send flowers to the Durham family.