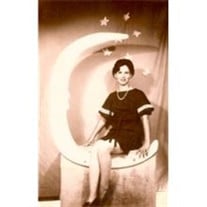 Arvina L. Copeland, 69, of Scipio, died at 1:15 p.m. Sunday, August 23, 2015 at her home after battling a long illness. She was a member of The Kingdom Hall in North Vernon and she was involved in door to door ministry. She was a graduate of Clearspring High School. Mrs. Copeland was born December 10, 1945 in Indianapolis to the late Lester Frank Bowling and Eula Jane Root Bowling. She had lived in Jennings County since 1986. She was married to Larry Copeland and he is deceased. Survivors include 3 daughters, Odetta Wheeler of Scipio, Amber Jo Wheeler of South Bend, and Patricia Wheeler of Wayne, New Jersey; 5 step-children, Curt Copeland, Deborah Cooley, James Copeland, Ed Copeland, & Larry Dean Copeland; 8 grandchildren, John Wayne Rieken, April Rieken, Jessica McVey, Daniel Baker, Joshua Wheeler, Casey Poppy, Gage Wheeler, & Kylee Wheeler; 8 great grandchildren; 2 brothers, Clyde Root of Ohio and Bill Bowling of Butlerville. She was preceded in death by her parents, husband, 2 brothers, 1 sister, 1 grandson and 1 great grandson. Friends may call Tuesday, August 25th from 5-8 pm at Johnson Funeral Home, Vallonia. A Memorial Service will take place Saturday, August 30 at 2:00 p.m. at The Kingdom Hall in North Vernon with Ron Haislup officiating. Burial will take place at the Vallonia Cemetery at a later date. In lieu of flowers, Arvina wished that donations be made to Mercy Rescue & Adoption Inc., PO Box 537, North Vernon, IN 47265. Arvina was always a woman on the go, she was known to her family and friends as a hard worker and always had a project going. It was a rare day when she wasn't doing some carpentry work, puttering around on mechanical repairs, working on a bit of remodeling, or planting something. She had an innate love of anything exciting and was always willing to try new things, even when some might have thought she was "too old"! Some of her many experiences were, class 4 whitewater rafting, snorkeling with stingrays, bareback mule riding, traveling, and her lifelong dream of walking part of the Appalachian Trail. Arvina had a unshakable belief in God and during her lifetime she shared her love of God and the Bible to others through home bible studies and later through ministry work at the women's prison in Madison. In her later years she developed a passion for animal rescue and was an avid supporter of the humane treatment of animals. Many animals were given a second chance at a happy, healthful life due to the generosity of Arvina and her late husband, Larry Copeland. Online condolences may be made to the Copeland family at Johnsonfh.net. Service: 2:00 p.m. Sauturday, August 29, 2015 The Kingdom Hall, North Vernon Visitation: 5-8 p.m. Tuesday, August 25, 2015 Johnson Funeral Home

Arvina L. Copeland, 69, of Scipio, died at 1:15 p.m. Sunday, August 23, 2015 at her home after battling a long illness. She was a member of The Kingdom Hall in North Vernon and she was involved in door to door ministry. She was a graduate of... View Obituary & Service Information

The family of Arvina L. Copeland created this Life Tributes page to make it easy to share your memories.

Send flowers to the Copeland family.