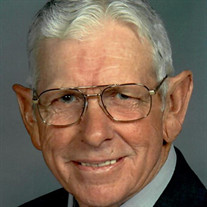 Alvin Victor Hackman, 89, of Vallonia, passed away at 12:40 a.m. on Sunday, February 16, 2020 at the University of Louisville Hospital. He had been ill for 3 weeks. He was a 1948 graduate of Vallonia High School and served in the US Army from January of 1953 to December of 1954 during the Korean Conflict. Alvin was a farmer of grain & livestock with a passion for feeding cattle. He was a life-long member of Trinity Lutheran Church where he served on many boards. He was also on the original planning committee for Lutheran Central School. Alvin loved spending time with his family and working on his farm. He was born on May 7, 1930 in Vallonia, to the late Victor & Esther Otting Hackman. On April 10, 1955, in Vallonia, he married Dorothy Louise Pollert Hackman and she preceded in death on January 8, 2014. Survivors include a son, Denver (Diane) Hackman—Vallonia; son-in-law, Paul Sitterding—Brownstown; a brother, Charlie (Laverne) Hackman—Vallonia; sister-in-law, Grace Stuckwisch—Seymour; brother-in-law, Kenneth (Elsie) Pollert—Vallonia; grandchildren, Daniel (Erica) Sitterding, Ben Sitterding, Rachel Sitterding (Brad), Rebekah (Kwin) Cutter, Hannah Hackman, Justin Fleetwood, & Sarah Fleetwood (Kamron); 8 great grandchildren; & several nieces & nephews. Alvin was preceded in death by his parents, wife, a daughter—Marcia Sitterding, a sister—Melba (Victor) Klosterman, a brother—Paul (Mary) Hackman, and a brother-in-law—Noble Stuckwisch. Funeral Services for Alvin will be conducted at 11:00 a.m. on Friday, February 21, 2020 at the Trinity Lutheran Church with Pastor Jordan McKinley officiating. Friends may visit the family on Thursday, February 20th from 4:00-8:00 p.m. at Johnson Funeral Home and from 10:00 a.m. until service time at the church on Friday. Burial will take place at the Trinity Lutheran Cemetery with full military graveside rites. Memorial contributions may be given to Trinity Lutheran Church or to Lutheran Central School. Online condolences may be expressed at www.johnsonfh.net

Alvin Victor Hackman, 89, of Vallonia, passed away at 12:40 a.m. on Sunday, February 16, 2020 at the University of Louisville Hospital. He had been ill for 3 weeks. He was a 1948 graduate of Vallonia High School and served in the US Army from... View Obituary & Service Information

The family of Alvin Victor Hackman created this Life Tributes page to make it easy to share your memories.